Who Is To Blame for the Georgia's Snowpocalypse 2014? (Georgia Bankruptcy Attorney) 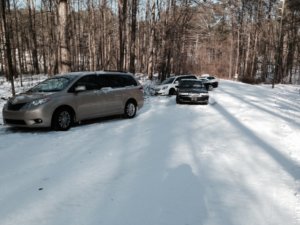 This has been a really rough week for everyone who lives in North Georgia.  I’ve lived in Georgia almost all of my life and I’ve never seen anything like this disaster.  What would normally take 15 minutes to get home ended up being 8 hours for many people.

I was meeting with a client in my Kennesaw office when the snow began.  I thought I would have plenty of time to make it home before things became dangerous.  Boy was I wrong!

As soon as the snow hit the ground, just enough of it melted to create a sheet of ice at many intersections.  Cherokee Street in Kennesaw instantly came to a standstill.  I had to abandon my car about 1.5 miles from home.  Since I had been late getting to work that morning, I ran out the door without my hat and gloves.  Fortunately, I had some newspapers in my car that had plastic bags on them.  These plastic bags saved my hands.

Many drivers ran out of gas while being stuck in the gridlock.  My associate, Brian Deitz, ended up spending the night in his car.

Thousands of students were trapped at their schools.  Many buses that made the attempt to leave school grounds ended up getting stranded.

People trapped in their cars with no gas also had no heat. No bathroom.  No food.  What a miserable experience!

Who should we blame for this disaster?  Governor Nathan Deal?  Atlanta Mayor Kasim Reed?

Personally, I don’t think we should blame anyone.  This storm was supposed to hit south of Atlanta.  Weather forecasters have cried wolf about snow storms so many times that most Georgians are conditioned to not taking them seriously when storm warnings go out.  Furthermore, I did not hear any storm warnings that morning.  All I heard was that a possible dusting may happen.

Weather forecasters are not perfect so we cannot blame them either.  Who do should we blame?  I think the answer is no one.  It was a freak snow storm.

I’m a bankruptcy attorney.  The reason this blame game bothers me so much is that many people who don’t know anything about bankruptcy will blame my clients for economic storms that hit them.  “People should be more responsible” some dummies will say.

Life happens.  Don’t blame anyone for that.  Pray to God for strength.  Make the best decisions you can with what you have and move on down the road.

Is Chapter 13 or Chapter 7 Better?

What Happens If You Declare Bankruptcy?