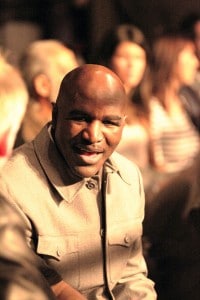 Do you remember when Mike Tyson bit off a chunk of Evander Holyfield’s ear?  That was a bad day for Mr. Holyfield but this week might have been worse.

Evander Holyfield said that he always thought he would be able to save his 54,000 square feet mansion on 235 acres in Fayette County, Georgia with 11 bedrooms, 17 bathrooms, three kitchens, two lane bowling alley and a 135 seat theater.  Earlier this week, he was evicted.

How could a rich and famous person like Evander Holyfield lose his house in foreclosure?  During his career, Holyfield has earned over $250 million dollars.

Could he have filed Chapter 13 bankruptcy and saved his house from foreclosure?

For purposes of this blog post, lets assume Holyfield could file Chapter 13 bankruptcy.

Should he have done it if he could have?  The answer is probably no.

For example, let’s say you have a person who has been unemployed for the six months.  Understandably, this person has fallen behind on their mortgage payments.  Let’s say a week before the foreclosure date, this person finds a new job but the mortgage company refuses to work them this late in the process.  This person would be a great candidate for Chapter 13 bankruptcy.  Chapter 13 allows you to catch up the back payments over time and stop the foreclosure of your home.

In contrast, if a person has mortgage payments that are just to high, Chapter 13 will not bring them down.

My guess is that Evander Holyfield has access to a team of lawyers.  Perhaps they looked at estimates of his future income compared with his monthly expenses and decided it was best to let the house get foreclosed.

If Mr. Holyfield has a large amount of unsecured debt, Chapter 7 might be a better option for him.

Evander Holyfield is the only five time World Boxing Champion in history.  I wish him the best as he fights this financial battle.

Bankruptcy Can Help Lighten The Load

Guarantor Liability After House is Foreclosed

The Tide Has Turned Against Collectors in Bankruptcy