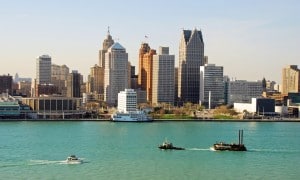 The City of Detroit, the 18th largest city in the United States, has filed for bankruptcy.  The city’s population has dropped from 2,000,000 in 1950 to approximately 700,000 today.  The Wall Street Journal refers to Detroit as the “automobile capital and one time music powerhouse.”

The Journal quotes Governor Rick Snyder as stating, “This [filing bankruptcy] was a difficult and painful decision, but I believe there are no other viable options.  This is a situation that’s been 60 years in the making in terms of the decline of Detroit.  From a financial point of view, let me be blunt: Detroit is broke.”

Governor Snyder believes that this bankruptcy filing will give Detroit “a chance for a fresh start without burdens of debt it cannot hope to fully pay.”  Click here to see Governor Snyder’s interview on Face the Nation.

How will this bankruptcy filing affect General Motors, Chrysler and Ford?  The Journal states that GM does not anticipate any impact from the city’s filing on its operations. “GM is proud to call Detroit home, and today’s bankruptcy declaration is a day that we and others hoped would not come.  We believe, however, that today also can mark a clean start for the city.”

The saddest part of this story is that many people who hold pensions from Detroit will most likely be cut under the reorganization.  In the past, many workers gave up opportunities in the private sector to work for a local government because the benefits and retirement made it worth taking a lower salary.  Today, after giving their entire careers to a government, these benefits and retirement programs are being cut.  Workers can no longer count on receiving all of the promised benefits from their government.

In addition to the workers, many retirees have invested in municipal bonds because this was the “safe” investment.  The bondholders of Detroit will surely take a hit.  Is there any such thing as truly safe investment anymore?

Lots of people are going to be angry about Detroit filing bankruptcy and will see it as a terrible thing.  What would have happened if Detroit had not filed?  The truth is that their creditors would have gobbled up their assets and the city would have collapsed.  Delaying a bankruptcy filing would not make sense for Detroit.

General Motors and Chrysler have survived their bankruptcies.  Both companies are now racking up strong profits as auto sales grow.  It is good that these companies recovered from the brink of economic collapse.  I hope Detroit’s bankruptcy will be just as successful.

Should I File Bankruptcy Over One Debt?

Bankruptcy – Should Filing Be a New Year's Resolution for You?