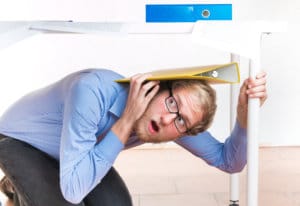 Earlier this year, I predicated that an earthquake may erupt in 2015 in the Georgia bankruptcy world.  It has.  The Georgia garnishment statute has been declared unconstitutional.

The Daily Report states, “Thursday’s ruling by U.S. District Senior Judge Martin Shoob said that the statute violated constitutional guarantees of due process by not giving debtors enough notice about the sorts of funds that are exempt from garnishment and how to claim those exemptions.  He said the statute also didn’t provide a procedure to adjudicate exemption claims quickly enough.”

The Daily Report goes on to state that Judge Shoob’s ruling “could affect all sorts of garnishments, including those that arise from business disputes and child support arrears.”

Personally, I do not believe this ruling will affect child support collections.  In my experience, Judges will bend over backwards to make sure that children get what they need to survive.

With respect to all other collections, I think they are going to come to a screeching halt.  Any attempt by a collection attorney to garnish a debtor’s wages using a statute that has been declared unconstitutional could be a violation of the Federal Fair Debt Collections Act.

What will happen in the next 6 months?

In the short run, some collection law firms and some consumer bankruptcy law firms will go out of business.  I believe that the number of bankruptcy filings will dramatically drop in the coming weeks unless an appeal of the Court’s decision is granted or the Georgia Governor calls a special session to fix this mess.  I think the odds of Nathan Deal calling a special session right now is pretty close to zero because of the huge cost it would impose on the state government.

Will Creditor attorneys be able to get back up from this knock out punch?

In the long run, the law will eventually be rewritten to comply with Judge Shoob’s ruling.  Credit card companies are politically super powerful.  They are not going to sit back and let their receivables go uncollected without a fight.

Eventually, things will balance out.  In the meantime, it will be interesting to watch the chaos that has erupted in the collection and bankruptcy worlds.

Bankruptcy Can Help Lighten The Load