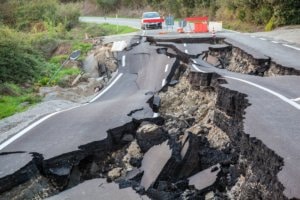 Earthquakes are hard to predict.  However, I think I see an earthquake coming in the collections and bankruptcy worlds.  The Georgia garnishment law might be declared unconstitutional this year.

If this happens, all garnishment actions in Georgia will come to a screeching halt.  As a consequence, some small collection and loan companies will go out of business.  Also, there will be a temporary but drastic drop in bankruptcy filings.

In Georgia, a creditor can take twenty five percent of your net paycheck and clean out your entire bank account.

In my opinion, this is why the bankruptcy rate is so high in Georgia.

This soon may change.

The Atlanta Journal recently reported that a disabled cancer survivor named Tony Strickland had his social security check and workers’ compensation check garnished.  For months, he had no access to his only sources of income.

He couldn’t afford his heart medicine and delayed a doctor’s visit for a blood clot in his hand until his arm turned black.”

Workers’ compensation and social security are protected streams of income under Georgia law.  However, the protections did not work in this case and a man was truly hurt as a consequence.  Legal Aid is representing Mr. Strickland and this guy is a perfect plaintiff.  How can you not be angered by what happened to him?  He could have died!

This may have happened without proper due process.  As a consequence, I think the entire Georgia garnishment law is going to get thrown out.  This means halting all garnishment actions until Georgia rewrites the garnishment laws to comply with the Constitution.

How long could this take?  I think it could take at least a year.

What are the consequences of tossing out the garnishment laws?  Ultimately, consumers will have greater protections.

Will Georgia lower the amount of money that can be taken out of a person’s paycheck?  My guess is yes.  Twenty five percent of your wages getting taken by a creditor is just too harsh for the vast majority of people.  Allowing creditors to clean out your entire checking account is just flat out draconian.

2015 is sure to be an interesting year in the garnishment world.