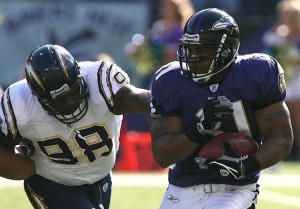 I remember when Jamal Lewis played football for the University of Tennessee (yes, I’m willing to admit that I’m a Vol fan).  He was absolutely incredible!  After leaving Tennessee, Jamal Lewis went on to have an incredible career with the Baltimore Ravens.  In nine seasons in the NFL, Jamal Lewis rushed for 10,607 yards.  He is truly one the greatest running backs in the history of football.

Jamal Lewis is not alone and neither are you.

While I don’t know what specifically caused Jamal Lewis to file bankruptcy, I know that he is not alone.  This is the worst economy this nation has experienced since the 1930s.  In 2011, there were 1,410,653 bankruptcy filings in the United States.  Famous five time world champion boxer Evander Holyfield recently lost his home to foreclosure in Georgia.  Famous baseball player Jose Canseco recently filed Chapter 7  in Nevada.

Pending Lawsuits and potential claims must be listed as assets in the bankruptcy case.

Mr. Lewis’ bankruptcy case illustrates why it is so important to choose a good attorney.  Jamal Lewis and other former professional football players have filed a lawsuit against the NFL for brain injuries suffered while playing football in the NFL.  Mr. Lewis has a smart bankruptcy attorney who clearly listed the pending lawsuit as an asset in the bankruptcy case.  If the case had not been listed on schedule B of the petition, the NFL would be able to file a motion for summary judgement against Lewis and have his entire claim thrown out of court.  Any person who files bankruptcy in Georgia must list all pending and potential claims against any person or entity.  Failure to list a claim as an asset will result in losing the right to pursue that claim.

Lucky for Mr. Lewis, he has a good bankruptcy attorney.