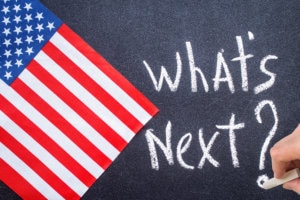 Almost all political pundits said he never had a chance.  Against all odds, Donald J. Trump is now our president.  In addition, the Republicans now have solid control of the House of Representatives and the Senate.  What does this mean for the bankruptcy world?  In this article, I will speculate as to what I think will come down the pipe during the next four years.

With Republican control of the both the House, Senate and White House, the odds are super high that lobbyists for the banks will push hard to hurt consumers with new bankruptcy reform laws.  I predict that during the first 100 days of the Trump presidency, there will a blitz of new laws decreasing regulations for businesses, an overhaul of Obama Care, and new laws on immigration.  How hard would it be to slip in some new laws to make it harder for consumers to file bankruptcy?

For the record, I do not believe that it is only Republicans that pass harsh laws on Bankruptcy.  Both Hillery Clinton and Joe Biden voted for the last overhaul.  When the Democrats controlled the House, Senate and White House, they could have made student loans dischargeable in bankruptcy.  They did not do so.  During the housing market meltdown, if consumers had been allowed to cram down their mortgages in bankruptcy, housing prices would never have dropped they way the did.  Democrats failed us.  If you want to know why, just follow the dollars.  Banks threw millions in political donations to the Democrats during this time.

For many years, Senator Paul Wellstone stopped harsh new bankruptcy laws by using the filibuster in the Senate. Unfortunately for consumers, Mr. Wellstone was killed in a mysterious plane crash in 2002.  Fast forward to 2005 and you get bankruptcy reform passed by both Democrats and Republicans.  Who will be the champion for consumers now?  Will it be Bernie Sanders or Elizabeth Warren?

The Stinky Past Eight Years

Unfortunately for us, Obama did not establish a good tone during his eight years.  When Democrats had control of the House, Senate and White house, Obama said to the Republicans, “Elections have consequences.”  In other words, stuff it you Republicans……you don’t matter.  Obama did not reach out to Republicans at all and this is why we have the most partisan division our country today.  Obama jammed many regulations and laws down the throats of the American people with Executive Orders.  Trump can now undo all of the executive orders should he choose to do so the day he becomes President and this could create a huge mess.

When Democrats had control of the Senate, the idiots changed the Senate Rules to make it easier for them ride rough shod over the Republicans.  Well guess what happens now?  Republicans are going to return the favor and the end result may not be a good one for consumers.

In my opinion, the biggest idiot in the United States Senate is Harry Reid.  He actually floated the idea of eliminating the filibuster when he controlled the Senate.  Guess what could happen now?  Republicans may do the same thing to him and use his words against him.

Many of my clients will sit on the fence for years before filing bankruptcy.  Some of them will completely drain out their 401k to make minimum payments on their credit cards.  Others will just hide until they finally get sued and garnished.  In this current climate of political change, if you are considering bankruptcy, I think you need to file sooner than later.

Changes in the bankruptcy laws could negatively affect your right to file.  Call me today at 678-408-4797 if you would like to set a free consultation with a bankruptcy attorney in my office.

6. Secrets from the debt collector’s playbook