What is Chapter 13 Bankruptcy

"Hello, my name is Jeff Kelly and I'd like to talk to you about chapter 13. What is it and how can it help you? Chapter 13 is basically a consolidation of all your debts. Many people like to refer to chapter 13 as the "catch your breath" provision of the bankruptcy code. It's basically designed for somebody who's maybe been out of work for a while now they're working again. They've got money to pay their creditors back they just can't do it all tomorrow. Chapter 13 allows you to step back catch your breath, and get caught up with your debts.

So let me give you an example of somebody who's facing foreclosure. Let's say they've been unemployed they're six months behind and now the creditor wants to take their house. Well, chapter 13 allows you to stop the foreclosure. Then we can take those six months that you're behind on and we can put those into a chapter 13 plan. We can stop the foreclosure and save the house. The same thing applies to a car. Let's say you are behind on your car payments and the creditor is threatened to repossess that car tomorrow you've got money to pay you just can't make up all those payments by tomorrow. We can file a chapter 13 and we can stop that car repossession.

Now, many people don't know this, but even if your car has been repossessed we might be able to get it back. If your creditor is still in possession of that car and we file a case they're going to have to give your car back - despite what they say.

Now if the creditor has sent you what's called the 10-day letter in the Georgia law (in other words they've given you 10 days notice that they're going to sell the car and then pursue you for the deficiency). Once that car sold it's gone and we would not be able to get it back.

Usually, in Chapter thirteen there's some debt that we are trying to take care of whether it's a house, a car, or sometimes people might owe some back taxes to the IRS. Chapter 13 is a great tool for stopping garnishments, foreclosures, and repossessions.

Another benefit to a chapter 13 is that if you do have a car debt, and if it's been more than nine hundred and ten days since you have purchased that car, in chapter thirteen we can pay back the value of the car not what's owed. So it's a great tool for somebody who's really upside down on their on their car note. We can cram it down and pay back just what the car is worth.

The other thing is interest rates. In Georgia you know we commonly see interest rates from buy here pay here dealership of thirty-five to forty percent. And in chapter 13 right now it's generally about somewhere between four to five percent is what people pay back in chapter 13 on the interest on the car. So you can save a lot of money on your car payments by filing chapter 13.

Now another myth about chapter 13 is that people will think, "well if I flunk the median income test that means I can't file at all now." The median income test is something that's designed by Congress to push people who make more money than an average family of their size out of chapter 7 and into chapter 13. Some people go to some website and fill out the median income worksheet and they get to the end of it and they see this number they think, "Oh my gosh there's no way I can afford to pay this amount of money!" Well, don't put all your faith and in those online tests. You need to meet with a bankruptcy attorney and have them look at your actual situation.

Sometimes even when you really do have a high number and there's no way around it. Well if you're paying back your debts at a hundred sentence on a dollar in chapter 13 then in that situation the median income test doesn't matter because all the debts are being paid. So sometimes I'll have a high-income client come in and they'll say, "Hey you know I do this online test and it says my payment is going to be sky-high I'm not going to be able to live I can't afford that!" But then when we actually look at their credit card debt it's not that high and we can come up with a reasonable payment. So again you know if you're considering bankruptcy you need to meet with a bankruptcy attorney because there's a lot of myths out there.

Well a couple things on that: Number one if you can avoid it, avoid it, but if you're in a situation where you've got compound interest that's just piling up super high (you know credit card interest rates typically run from twenty-five thirty percent per year) in chapter 13 one hundred percent plan you don't pay any interest on your unsecured debt 0.

So let's say someone's got you know thirty thousand dollars of credit card debt. Well, in a hundred sent chapter 13 plan they're going to save about ten thousand dollars a year just interest in late fees alone. So if you are considering bankruptcy, please give me a call at 1-888-832-8249. Our main office is in Rome and the phone number is 706-295-0030. I've got over 200 articles about bankruptcy on my website at www.kellycanhelp.com. And I also have a podcasting website, so if you want to download some podcasts about bankruptcy to your iPhone you can go to www.kellybankruptcy.com.

Thank you very much. 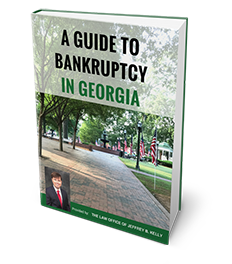